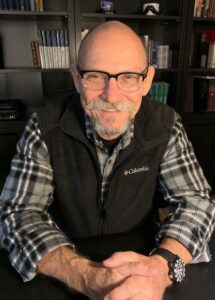 Pastor Mark is a native Tulsan. He was raised in church but did not understand his need for repentance and the Lordship of Jesus Christ until much later. When he was 5 years-old he was miraculously healed from a crippling childhood disease. He knew he was healed by God’s hand, but because it was never explained to him, he understood the healing but didn’t understand his need for a Savior.

In elementary school Mark’s family moved to California, where he spent the next 40 years. Mark surrendered his life to Christ in 1982. He retired from a 26-year career in law enforcement with the Oakland, California Police Department in 2004, and attended the School of Ministry at Calvary Chapel Modesto. Mark was sent out from Calvary Chapel Modesto to be the Senior Pastor of CC Lodi, where he served for 2 ½ years.

Mark and his lovely wife Bobbi, have 9 children and 18 grandchildren. Mark’s heart is to reach the lost and make disciples for Jesus. He has a special burden to reach those “lost in church”- those who think they are going to heaven just because they are “good people” and attend church.